The Week on Wall Street
The market had a choppy five days, with traders reacting to geopolitical developments and weaker-than-expected jobs data. Even so, the three major U.S. equity indices posted weekly gains and continued their strong start to the new year. During Friday’s trading session, the Dow Jones Industrial Average topped 29,000 for the first time.

Holiday Hiring Numbers
Wall Street was unimpressed by the latest jobs report from the Department of Labor. Employers added 145,000 net new workers in December; economists surveyed by Dow Jones had forecast a gain of 160,000. Wages grew less than 3% year-over-year for the first time in 17 months.

Unemployment remained at a 50-year low of 3.5%, however. The broader U-6 jobless rate, which also includes the underemployed, declined to 6.7%, the lowest in 26 years of recordkeeping.[3]

Oil Prices Decline
The rally in crude oil spurred by strained U.S.-Iran relations ebbed this past week. At Friday’s closing bell, WTI crude was worth $59.04 a barrel on the New York Mercantile Exchange, down 6.36% for the week and 3.31% year-to-date.[4]

What’s Ahead
A new earnings season starts Tuesday, with big banks leading off and reporting fourth-quarter results. Chinese Vice Premier Liu He will be in Washington, D.C., through Wednesday, and during his visit, he and President Trump are expected to sign the phase-one trade deal between the U.S. and China.[5]

THE WEEK AHEAD: KEY ECONOMIC DATA
Tuesday: The December Consumer Price Index, providing a look at inflation last month and for all of 2019.
Thursday: December retail sales figures from the Department of Commerce.
Friday: The University of Michigan’s preliminary January Consumer Sentiment Index, assessing consumer confidence levels from multiple angles.

Source: MarketWatch, January 10, 2020
The MarketWatch economic calendar lists upcoming U.S. economic data releases (including key economic indicators), Federal Reserve policy meetings, and speaking engagements of Federal Reserve officials. The content is developed from sources believed to be providing accurate information. The forecasts or forward-looking statements are based on assumptions and may not materialize. The forecasts also are subject to revision.

Source: Zacks, January 10, 2020
Companies mentioned are for informational purposes only. It should not be considered a solicitation for the purchase or sale of the securities. Any investment should be consistent with your objectives, time frame and risk tolerance. The return and principal value of investments will fluctuate as market conditions change. When sold, investments may be worth more or less than their original cost. Companies may reschedule when they report earnings without notice. 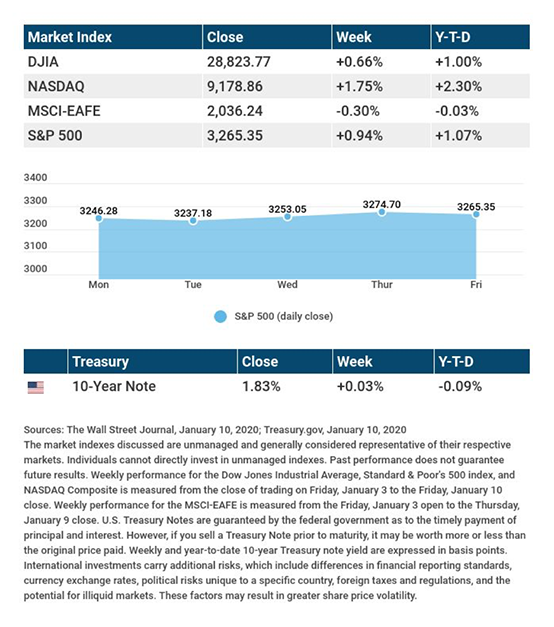