The Week on Wall Street
As November wrapped up, U.S. equity benchmarks advanced. Stocks were again aided by a sense of optimism that a preliminary U.S.-China trade deal could be near.

Markets Wait for News of a Trade Pact
Wednesday, a senior White House official told Politico that the U.S. was “millimeters away” from a phase-one trade agreement with China, a deal that might involve the removal of certain tariffs.

The Latest on Consumer Spending and Consumer Confidence
Personal spending was up 0.3% in October, according to the Department of Commerce. This happened even with no gain in household incomes.

The Conference Board said its Consumer Confidence Index came in at 125.5 for November. Even though it has declined for four straight months, the index remains well above levels seen during the first half of the decade.[5][6]

Source: Econoday, November 29, 2019
The Econoday economic calendar lists upcoming U.S. economic data releases (including key economic indicators), Federal Reserve policy meetings, and speaking engagements of Federal Reserve officials. The content is developed from sources believed to be providing accurate information. The forecasts or forward-looking statements are based on assumptions and may not materialize. The forecasts also are subject to revision.

Source: Zacks, November 29, 2019
Companies mentioned are for informational purposes only. It should not be considered a solicitation for the purchase or sale of the securities. Any investment should be consistent with your objectives, time frame and risk tolerance. The return and principal value of investments will fluctuate as market conditions change. When sold, investments may be worth more or less than their original cost. Companies may reschedule when they report earnings without notice. 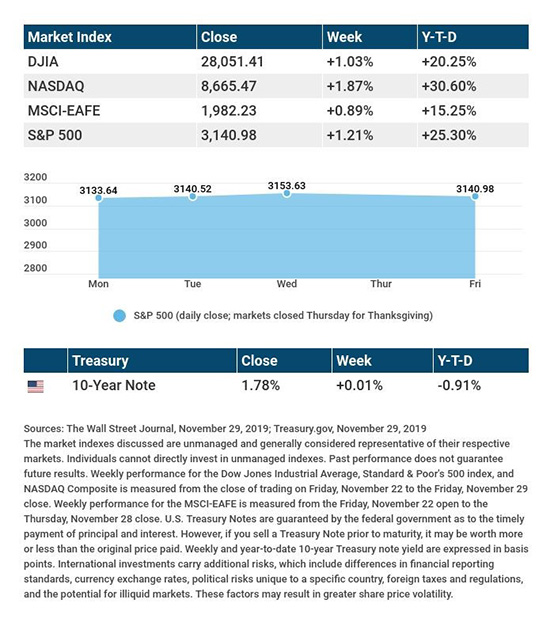